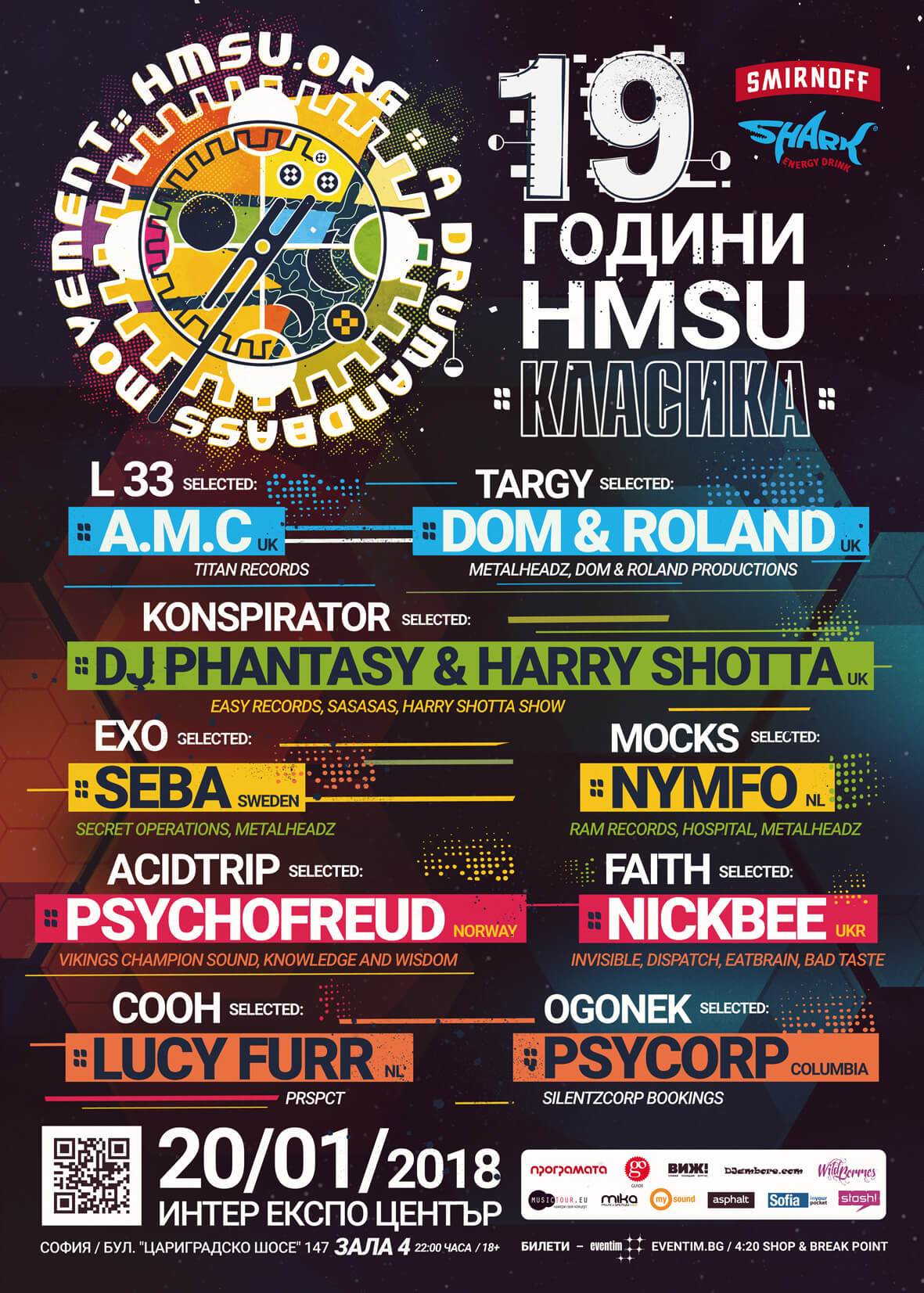 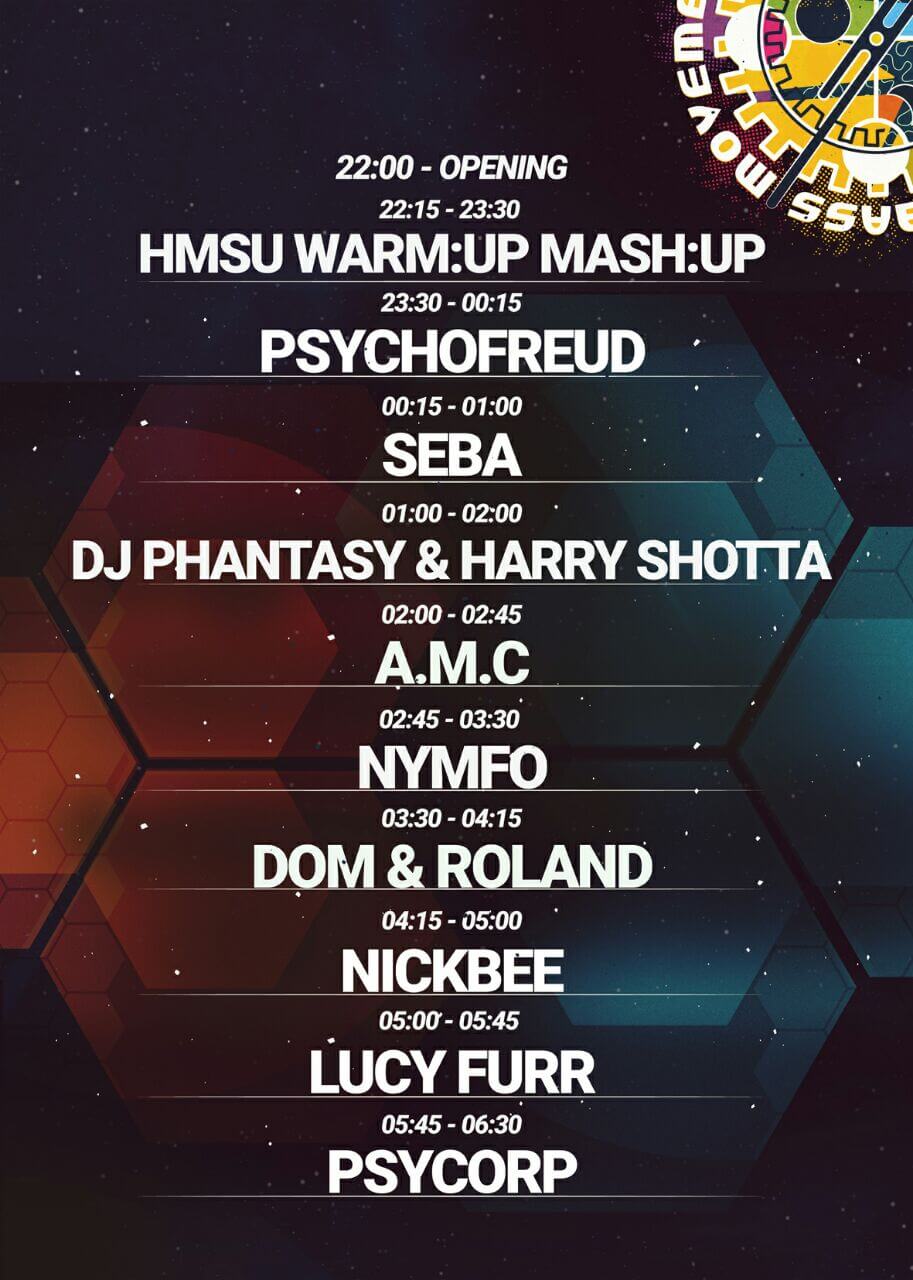 HMSU celebrates 19 years on the scene and instead of retiring it is time for bigger and better parties. The 19th Birthday represents the ‘CLASSICS’ series and features 10 international guests in the line-up. The agents from the oldest Bulgarian drum and bass formation designates the ‘Classics’ concept  to those big events under HMSU quality stamp which feature the true, classic masters of the genre. For this year’s Birthday line-up, the outstanding, ‘classics’  selection of guests is composed by the choice of each HMSU artist.

The massive party is bound to happen on the 20th of January, 2018 in Inter Expo Center, Hall 4 with a kick-off at 22:00h. The location has capacity for a crowd of 4000, which makes it one of the biggest and most suitable for this purpose in Sofia. The organization is hopeful that the location responds well to the increasing interests and needs of our fans, whose numbers are on the rise with every year. Currently, tickets are available at the price of 30 leva, after early bird tickets at 15, 20 and 25 leva sold out within a couple weeks. You can buy tickets online or from the EVENTIM distribution network. At the door, tickets will sell at the price of 35 leva.

But who are these special guests the HMSU crew invited for its 19th Birthday and why is their appearance on the Bulgarian drum and bass stage considered to be ‘CLASSICS’? 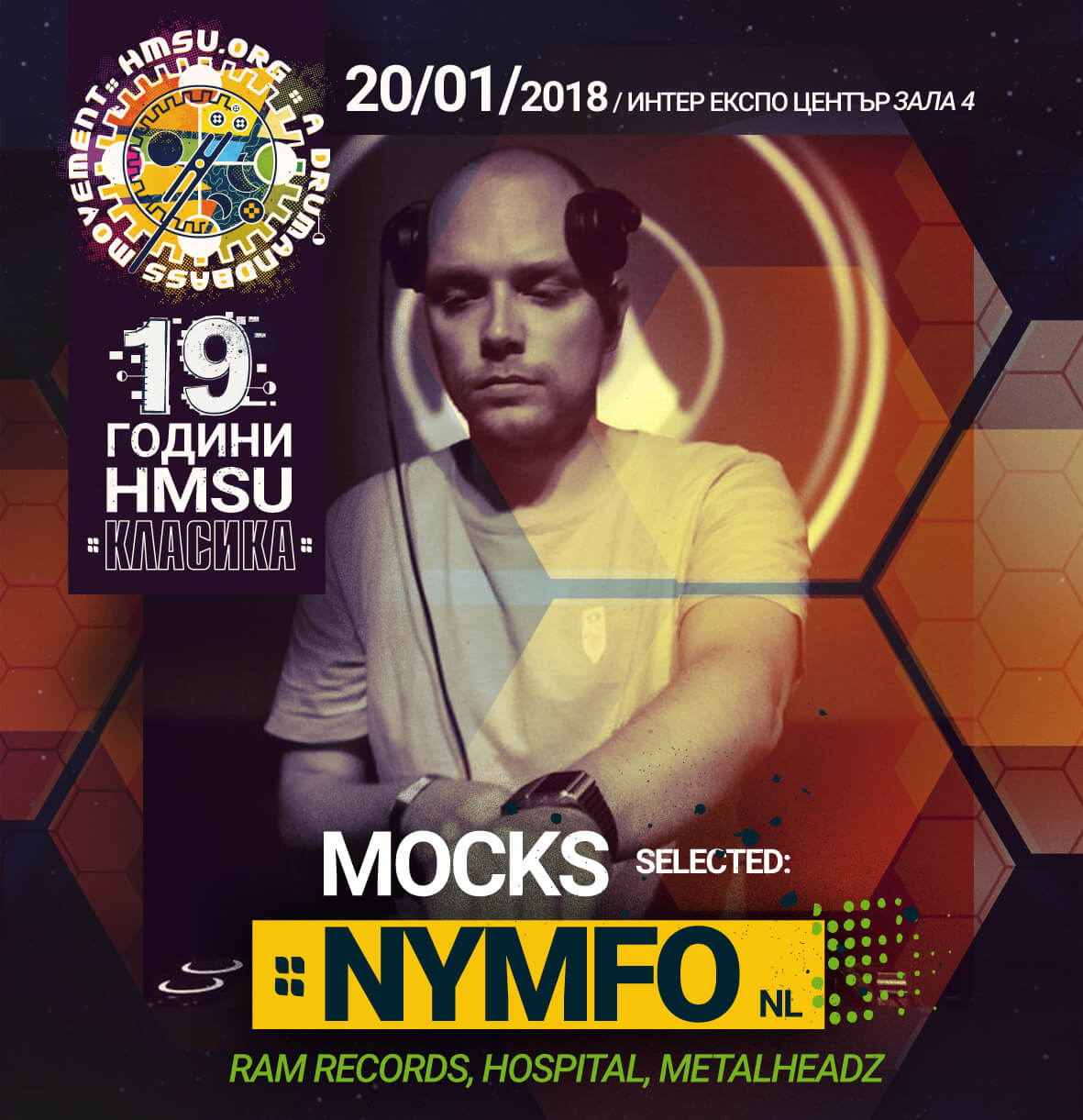 ► Nymfo, is one of the Dutchmen in the special selection. He began releasing drum and bass back in 1995 and continues to do so consistently over the years, and most recently in 2017. In 2005 and 2007 he won the best Dutch DJ award. He works with a some of the biggest names today such as Icicle and Proxima. His tracks are released by labels such as Andy C’s Ram Records, the legendary Renegade Hardware, Critical Records and Shogun Limited. In his homeland he is also popular as organizer of two of the emblematic nights - Red Zone and ICON - which has welcomed in the Netherlands dozens of the brightest names on the global drum and bass scene. We will be able to hear his live set, thanks to the bullseye selection of Mocks.

► DJ Phantasy is one of those artists, who has been an integrated part of the formation of the rave and dance scene since it first emerged. In the 90s, DJ Phantasy has worked with big names such as Carl Cox, Fabio, and Mad Professor and together they have changed the vision and understanding of entertainment for generations ahead. He remixes tracks and releases hits one after the other, contributing to a discography of more than 300 officially released compositions. This will be his first appearance on Bulgarian stage in the company of yet another special guest who debuts on Bulgarian soil. This is ► MC Harry Shotta, who certainly keeps the world on edge with his skills on the mic. He is a Guinness record holder for the highest number of words in one track with his record Animal. MC Harry Shotta lyrics overtook the previous record, held by Eminem himself. DJ Phantasy and MC Harry Shotta are Konspirator’s special selection for the event, and their collaboration is a recipe for an insane mix. 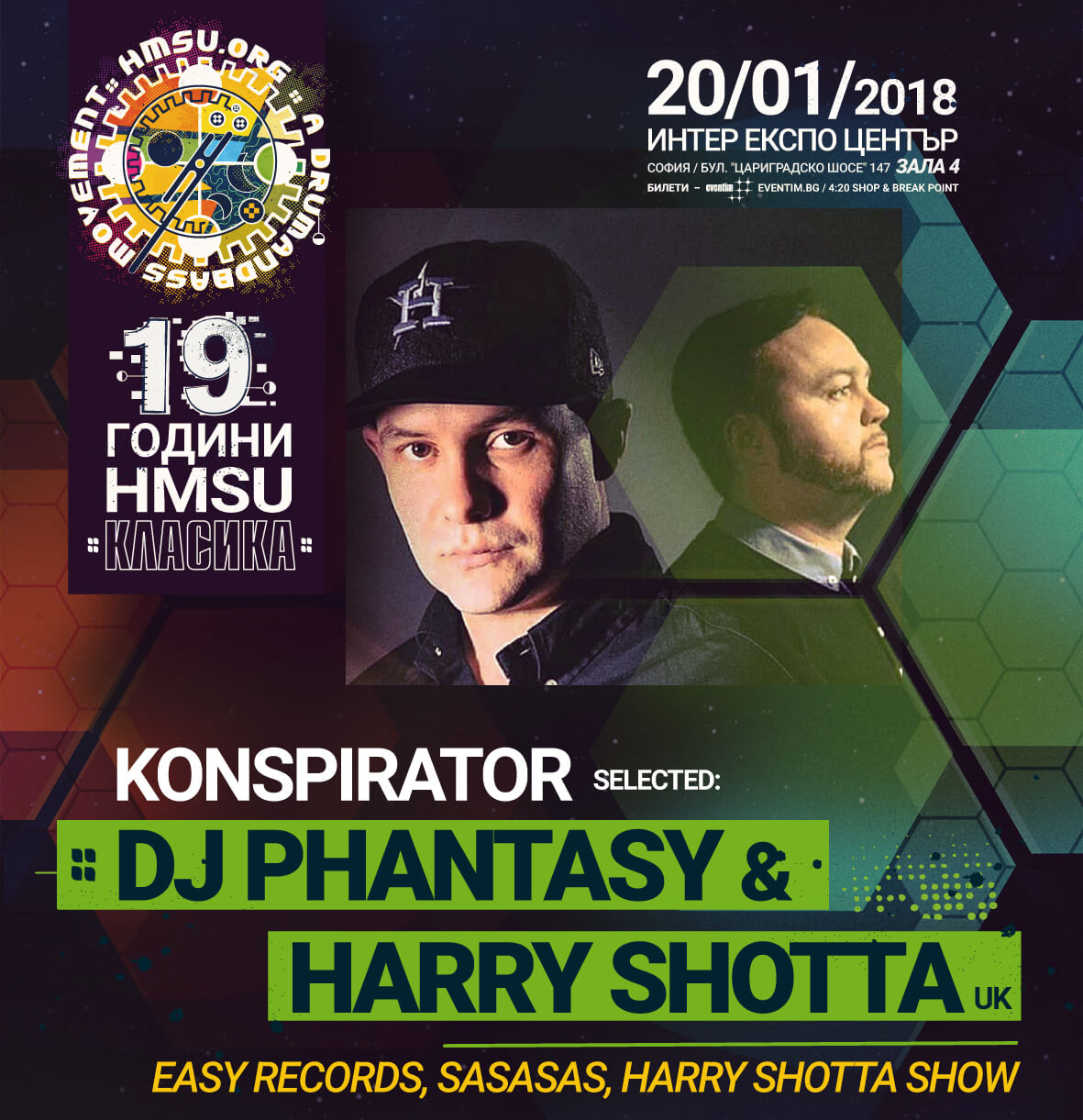 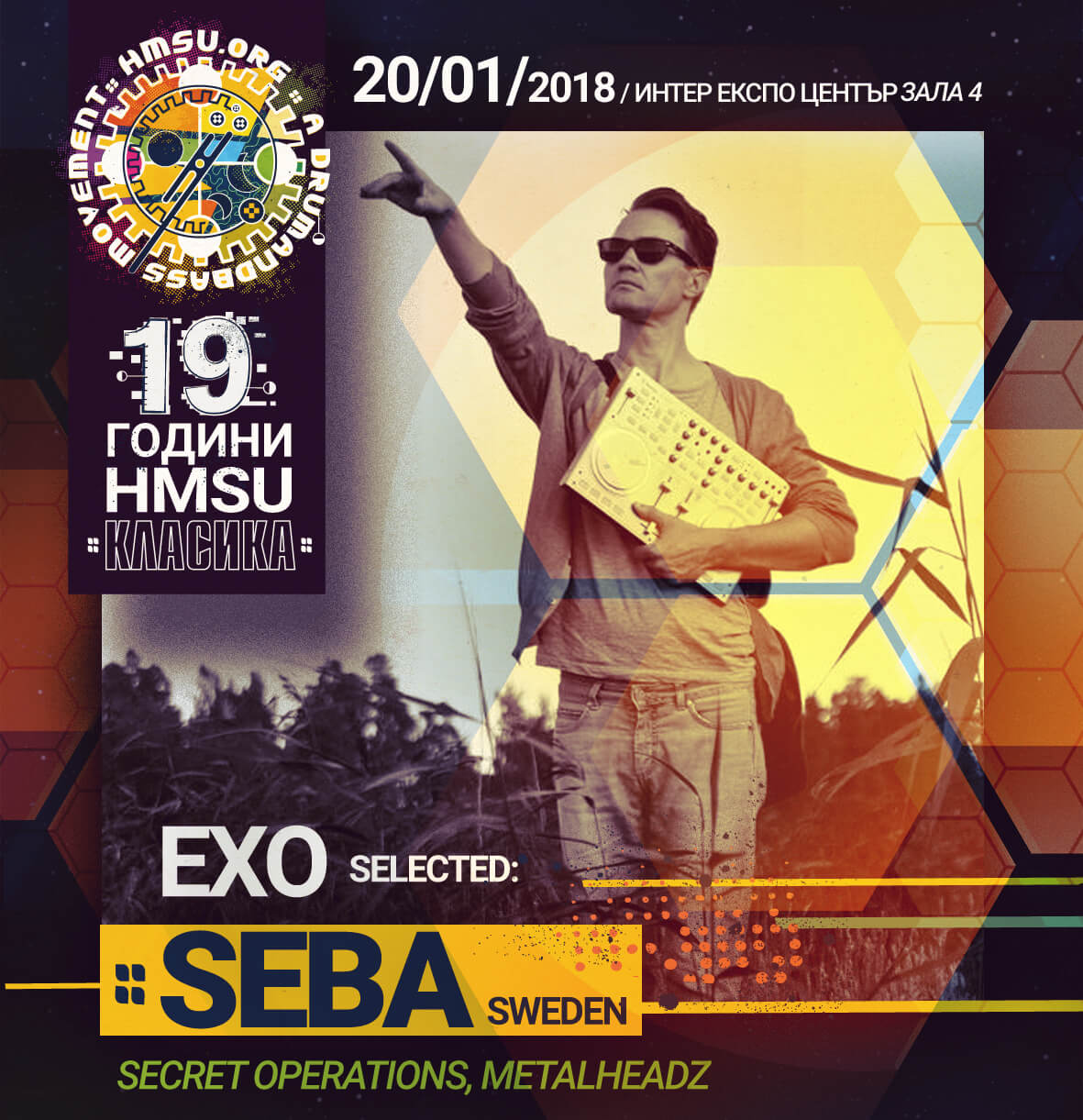 ► Seba is the alias of Sebastian Ahrenberg from Sweden. Admirers of the genre from every generation will recognize his name, as his work began in the 90s. This has become possible partially thanks to LTJ Bukem and his Looking Good Records, with whom Seba released a few EPs in the beginning of his career. He preserves his contemporary sound in every forthcoming track and is irrespective of the label behind it, Seba keeps his unique style. In the past 10 years we have witnessed the authentic musical maturing of the artist, which is evident in his albums from 2003 till 2013 including more than 60 EPs and LPs from various labels. This will be Seba’s first visit and behind his selection is the H.M.S.U own experimentalist - EXo.

► Dom & Roland or Dominic Angus is without a doubt one of the classic masters on the drum and bass stage. He started his career in 1994 and has built up a reputation of an innovator among the electronic music producers. For years Dom & Roland is one of the proud representative of the genre's most significant label - Metalheadz, and his discography is comprised of the impressive 8 albums, and more than 70 EPs and LPs. Dom is one of the favourites of Bulgarian fans and also one of Targy’s favourite producers, so the selection of one of HMSU founders comes as no surprise. This will be Dom & Roland third visit to Bulgaria by invitation of HMSU. 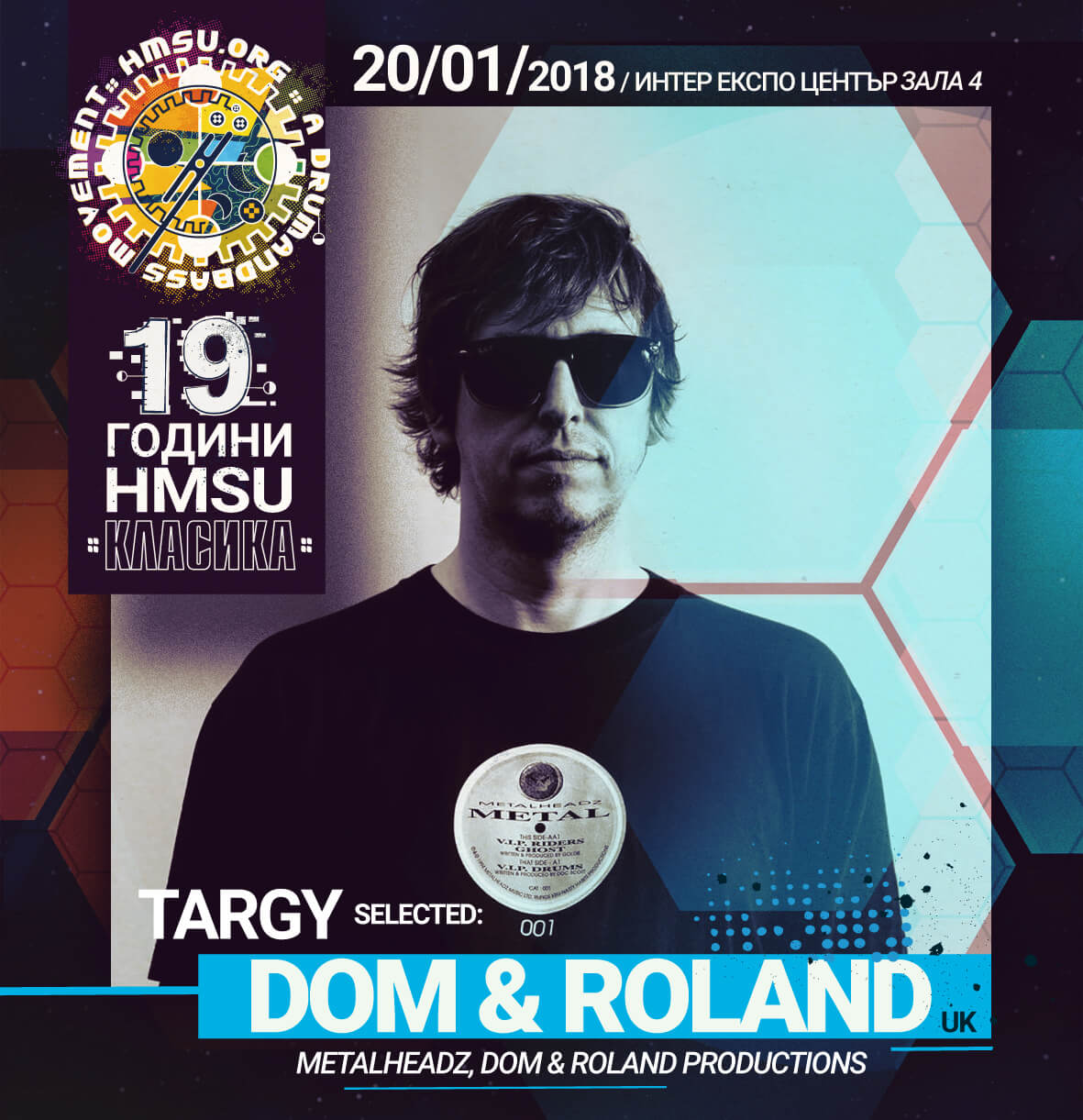 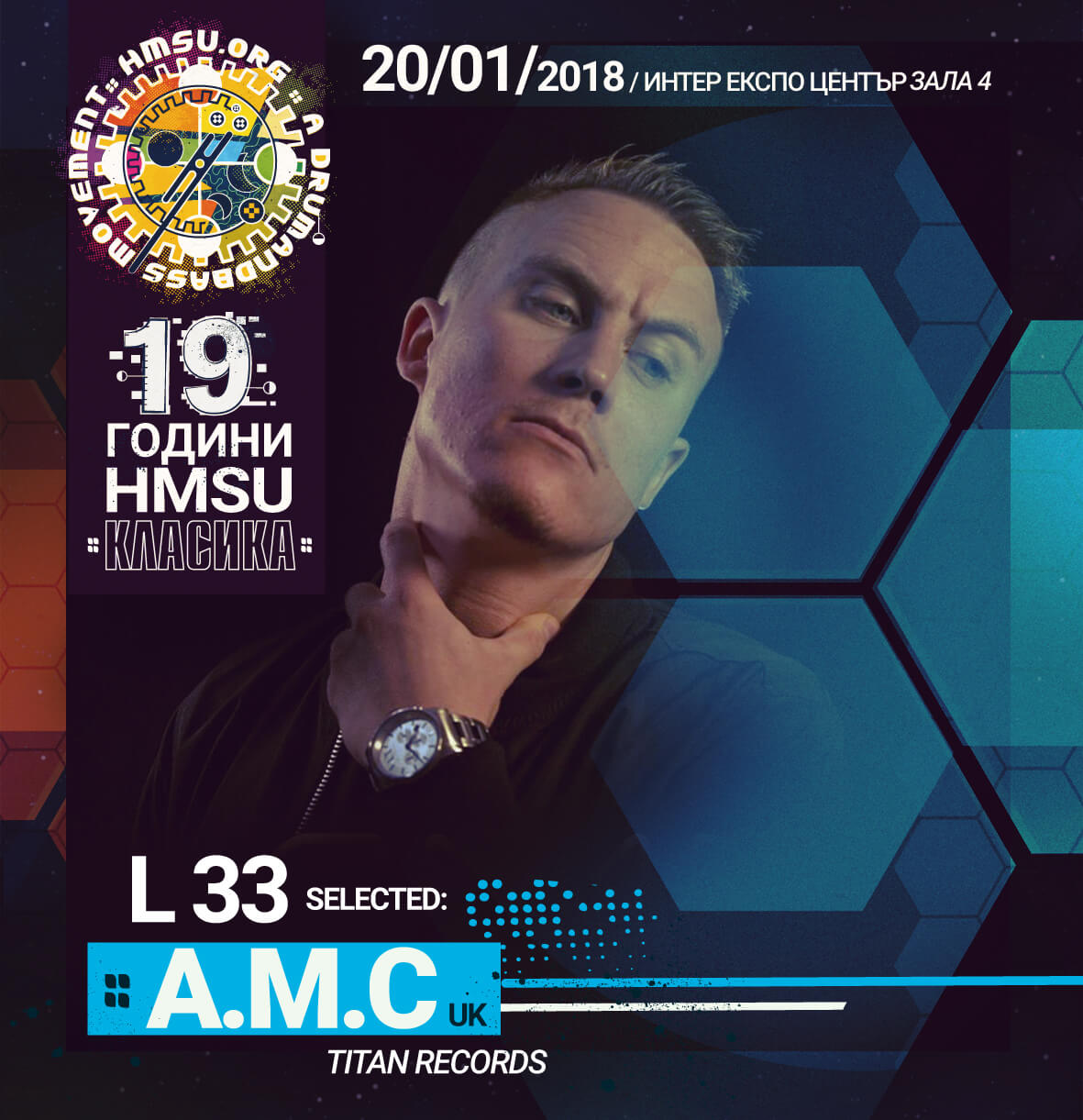 ► A.M.C represents the initials of Alex Max Calvert, who is one of the most exciting DJs at the global drum and bass scene over the last few years. He was discovered by the Drum&Bass Arena crew and for years has been the president of D&B TV. He is well known for his skills behind the decks which have brought him various awards and has ranked him in the leading charts of the movement. Today he is the owner of Titan Records. This will be his first gig in Bulgaria featuring an individual mix, and responsibility for his selection falls on one of HMSU’s newest members - L 33.

► Psychofreud is the artistic name of Anders Eriksen, who is most certainly the most famous Norwegian DJ Bulgaria has seen. He’s been in Bulgaria a few times at the invitation of HMSU and other promoters, but his very first appearance was 12 years ago. Bulgarian audience warmly welcomes his gigs, when he converses with the crowd in the most beloved of jargons for the fans - ragga jungle music. While his d&b work began in 2001, he has been attracted to producing hip-hop and dub since the 1990s. During his career, he has worked with all active ragga performers until today without any exceptions. Known as the ‘Hunter of Acapellas’, Anders owns records, which would easily cause the envy of passionate collectors. It does not come as a surprise, that this selection was the deed of the master and longtime ambassador of the ragga-jungle style in Bulgaria - acidtrip. 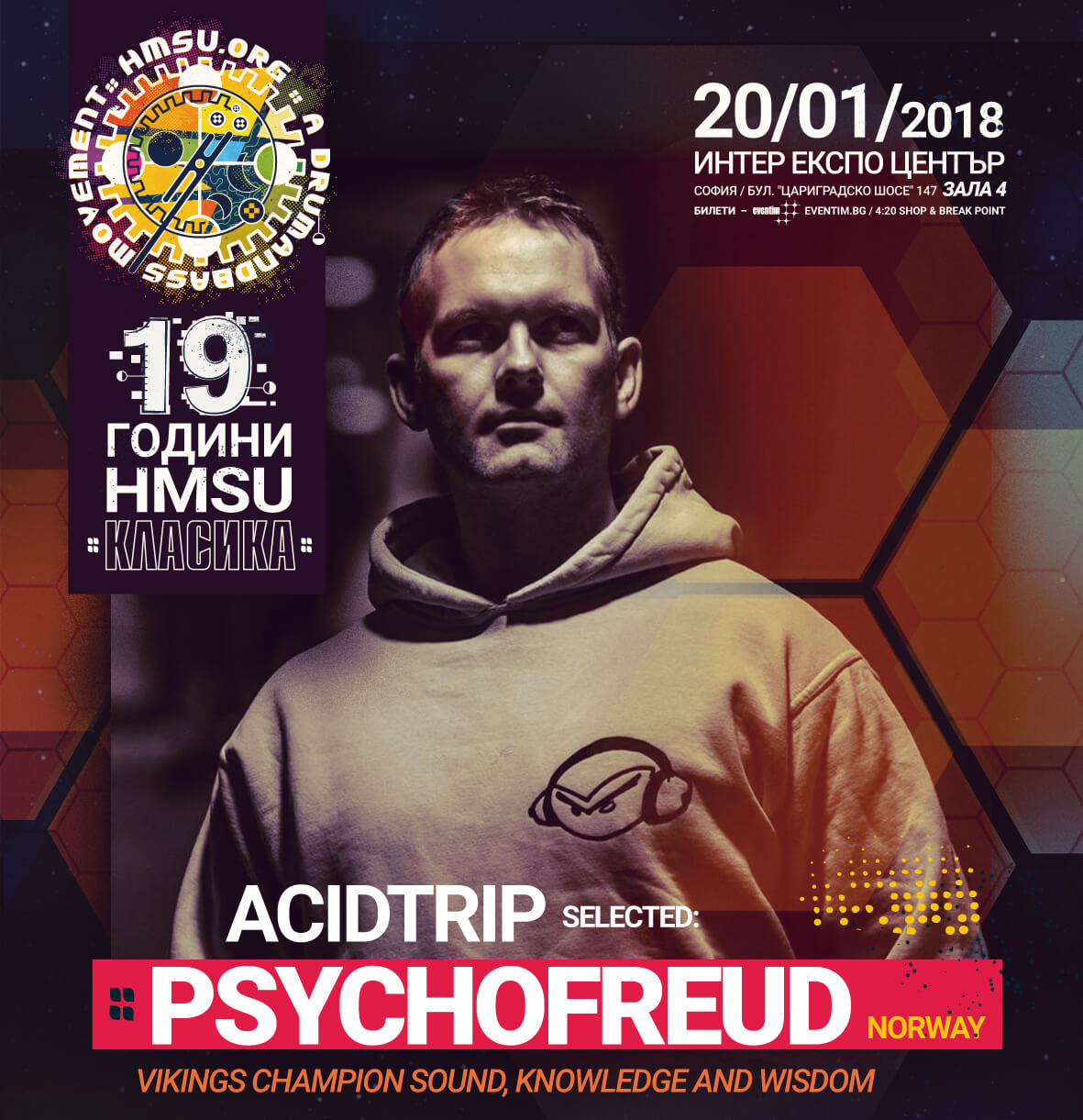 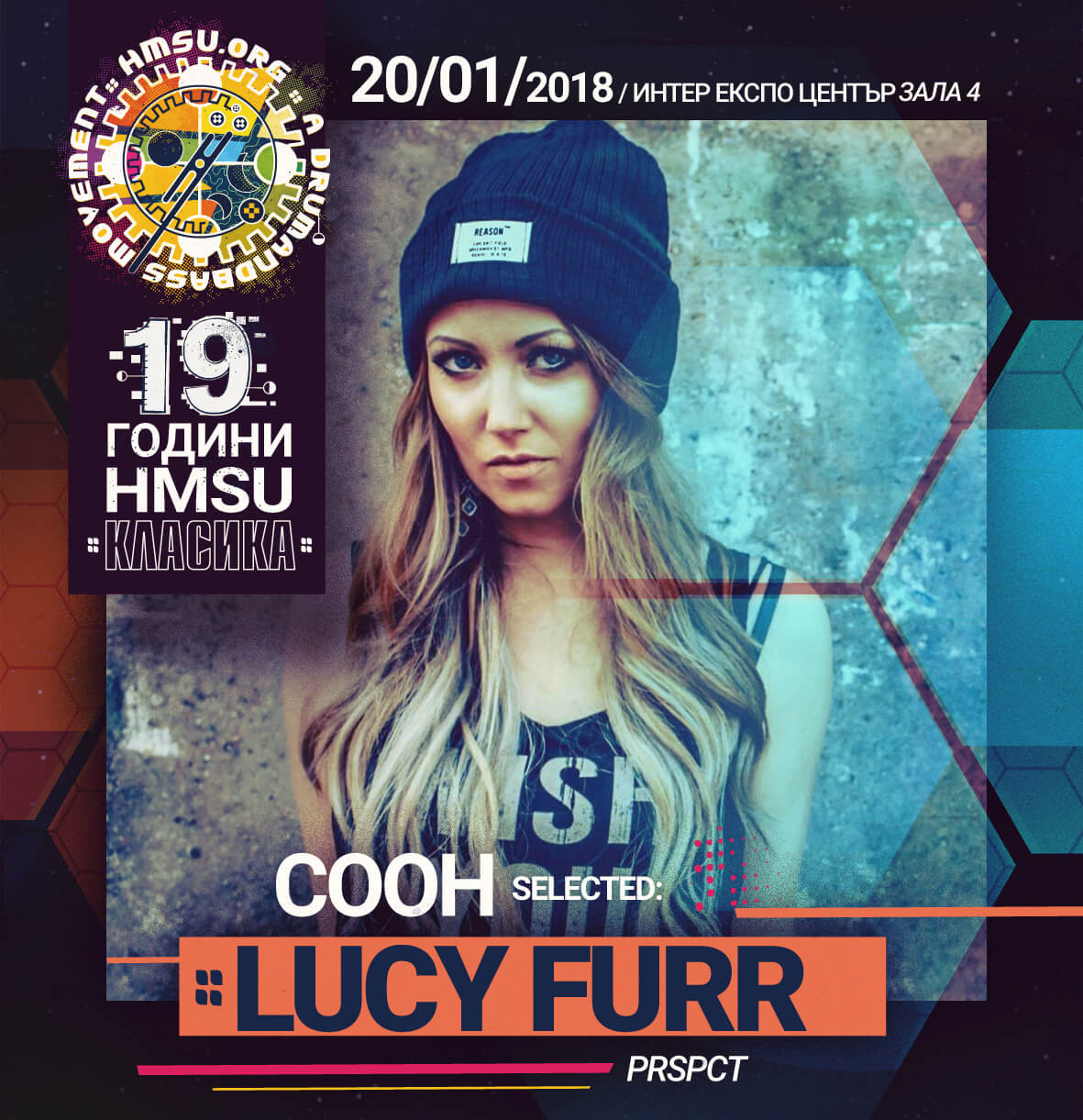 ► Lucy Furr is also known as Miss Hysteria or Maline Kolbrink from the Netherlands. Seldom there could be a better place than the rainy fields near the North Sea for the birth of a charming lady, an embodiment of the Sukubito, with firm determination to drop the hardest cross-bread and dark-core over the heads of her fans. The evidence of her skills to do so are amounting, having more than 60 releases with some of the strongest labels in the sphere of hard electronic music since 2003 until today. Her name is well known to the fans of dark electronic sounds, which takes over to a near physical level the fans praising the hardcore scene. Lucy Furr is part of the PRSPCT Recordings crew together with COOH, who is responsible for her selection for the events line-up. This alone assures us in the quality of this choice.

► Nickbee is the artistic name of Nikolay Bogomolov from Ukraine. To a great extend owing his success due to work with Sunchase who discovered and introduced him in the drum and bass game in his teen years. In 2006, at the age of 15, Nickbee releases with the American label Black Reign, which kicks-off his career and quickly follows with releases for Noisia's label - Invisible Records, as well as Dispatch, Eatbrain, and others. Even though he has experimented with all kinds of styles, his current style can be described as a strange mixture of future funk and melodic bass. According to him, the academic background in the field of medicine has contributed to the authentic healing influence of his music. This will be his first visit to Bulgaria, and the reason for is is selected HMSU latest charm - Faith. 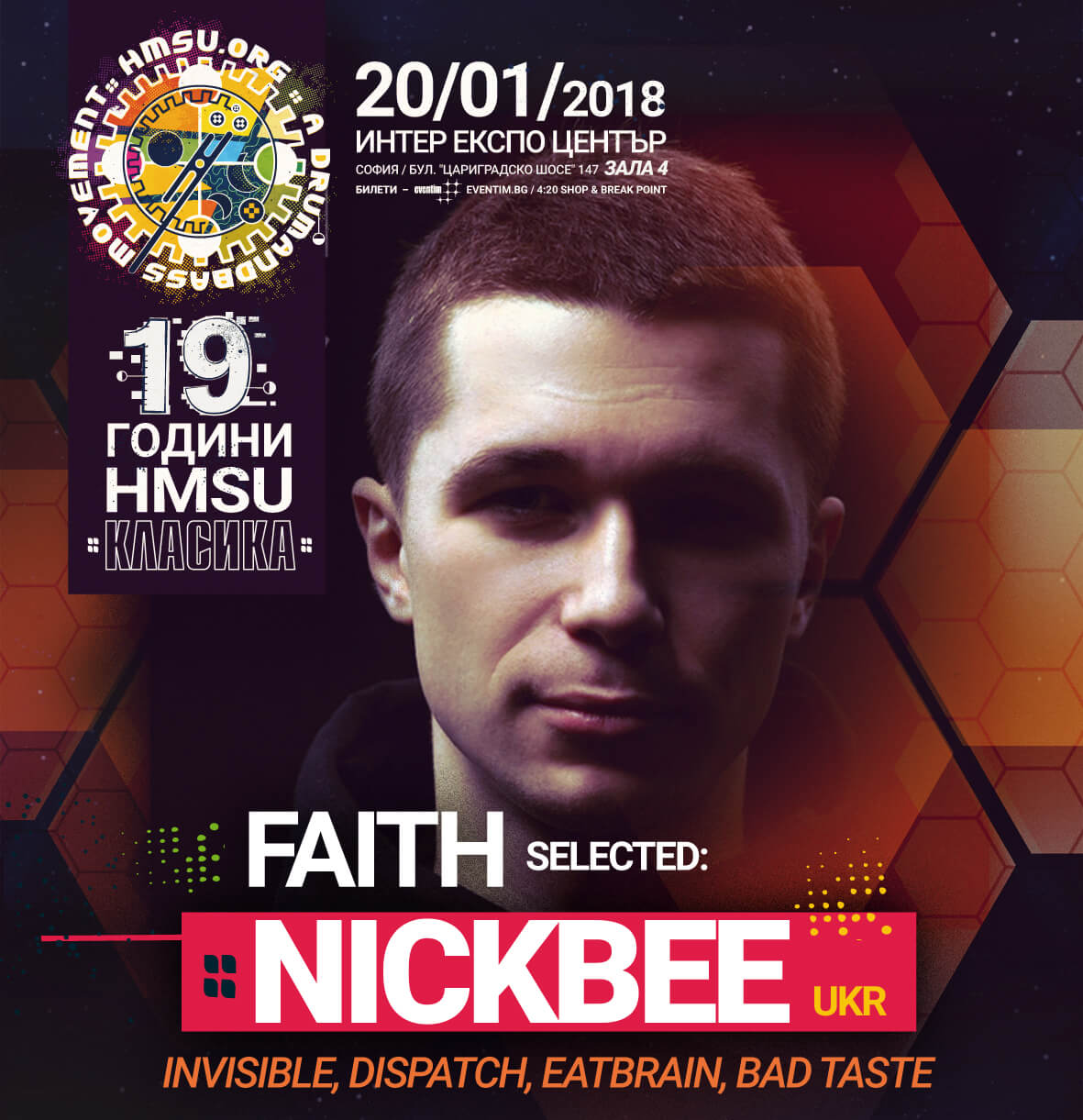 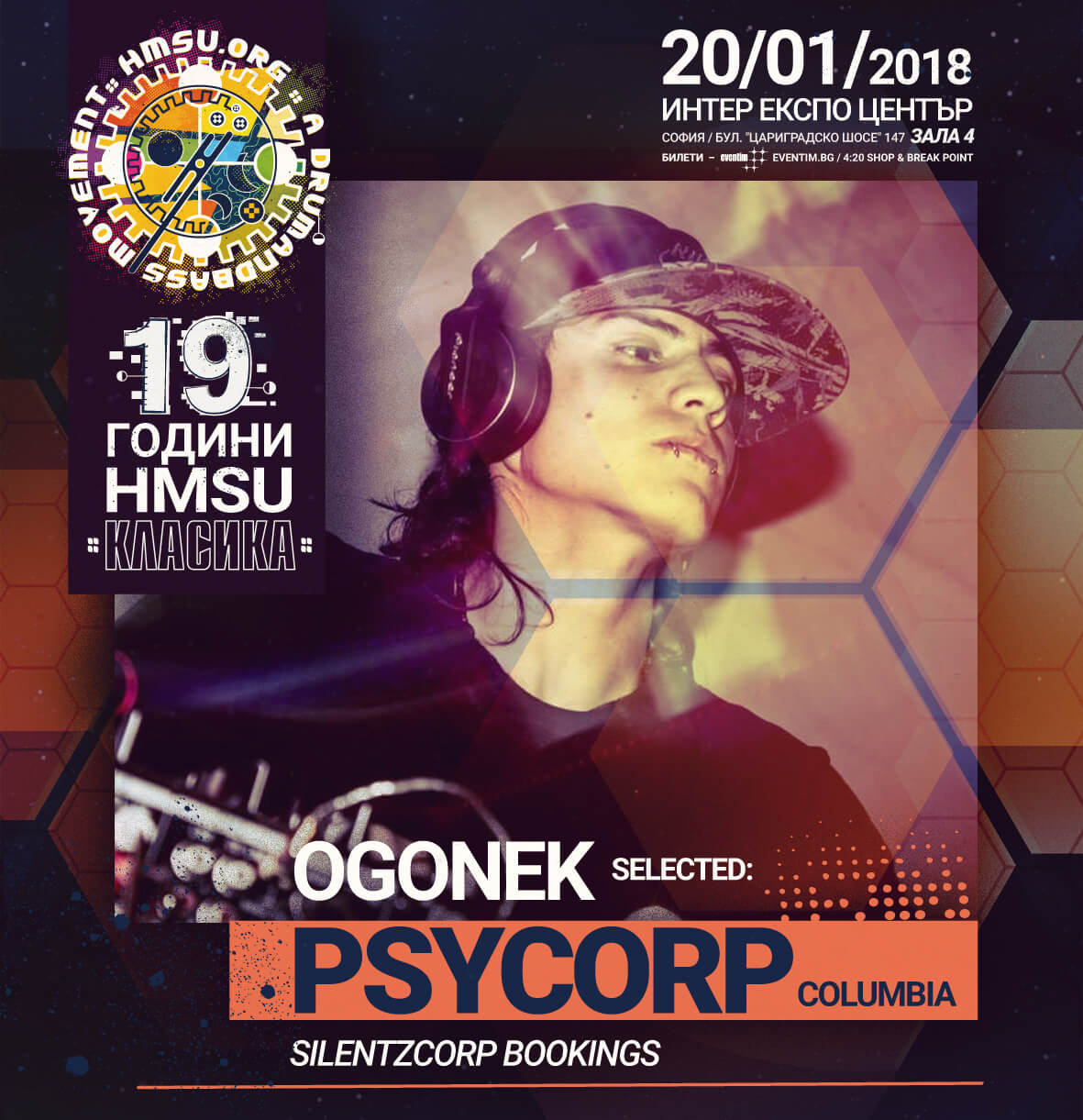 ► Psycorp comes to European soil straight from Columbia for the first time. He is known as one of the most technically prominent promoters of Drum and Bass in Latin America since 2008. His exclusive first visit to Europe is on the occasion of HMSU 19th Birthday. This is once again all possible thanks to Ogonek’s overseas connections, proving his serious connections with the global underground and his ability to sense high-quality sound from far away.

Part of the HMSU artists will prepare a special act, in which they will be mixing together, while our special guests will have more time in the line-up. Expect a lot more surprises, perfect for a proper Birthday of one of the biggest electronic music movements in Bulgaria.